Ahessan, 30, comes from Rakhine State, Myanmar, which he fled in recent weeks.
My name is Ahessan, I am 30 years old. Before the crisis, I was a farmer in my home village of Chin Khali, but I also taught English to children after work, so I was a very busy man.
On the morning of August 25, I was having breakfast with my family when the military entered the village and started firing their guns at us. It was indiscriminate and five members of my family died. 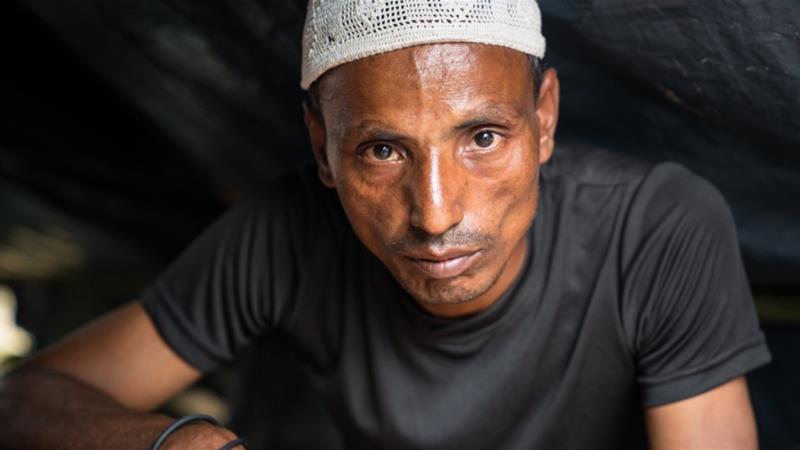 I found my mother lying on the floor with bullet wounds in her back, my sister lay nearby with stab wounds to her face and body. It was the most distressing scene I have witnessed, but I did not have time to be sad as I was scared the military would shoot me, too.
A soldier tried to rape my sister, she resisted but they still beat her up. She is so traumatised that she has not spoken a word since, and she can barely move - my brother and I carried her here with some bamboo and a blanket.
We saw many terrible things on the road to Bangladesh - there were dead bodies, children crying and old people starving. When we reached the border there were over a thousand other Rohingya trying to cross the river - eventually, we found a boat which took us across.
Our life in Bangladesh is very miserable - we do not have proper shelter, there is no sanitation and there is not enough space for all the refugees to sleep. We are living, but it is so horrible we might as well be dead. I worry that the Rohingya people will die out soon - if we stay in Myanmar then we will be killed, but here we have no life.
I believe the whole world is helping and supporting us and for that, I am very grateful. But I want the world to put themselves in our shoes - we are humans in the same way that you are humans, yet you are citizens of a country and we are not. I appeal to the whole world, please let us be citizens of a country, let us live like you.
Posted by inam at 10:39 AM No comments:

Woman before and after Islam

Assalamu'alaikum,
Women in pre-Islamic civilizations
Throughout the human history prior to Islam, women have been victimized and made to suffer too much. They endured unbearable deprivation, sorrow and oppression in all past civilizations. In other words, they were treated as if they were not human beings.
The Greeks said regarding a woman: She is like a poisonous tree and she is evil emanated from Satan. She may be sold like any merchandise.
For the Romans: She does not have a soul. They would torture women by pouring boiling oil on them or dragging them by horses.
For the Chinese: She is cursed water that washes away good fortune. A Chinese man would have the right to bury his wife alive. If a man were to die, his wife would be passed on as inheritance.
For the Indians: A woman is worse than death, hell, and fire. A woman didn’t have the right to live after her husband's death. Therefore, she had to be burned along with his corpse.
For the Persians: It is permissible to marry any of the female relatives without exception (incest). A Persian husband could command his wife to die.
The Jews said: A woman is a curse because she is the cause of sin and temptation. She is impure during her menses. It is permissible for her father to sell her.
The Christians: The French held a discussion in 568 A.D. Some of the issues discussed were: Is a woman a human or not? Does she have soul or not? If she has a soul, is it a human soul or an animal soul? And if it is a human soul then is it equal to a man’s soul lower than it? Finally, after long deliberation, they came to the conclusion that she is human, but she was created only to serve man.
During the rule of King Henry VIII of England, the Parliament decided that it is unlawful for women to read the New Testament (Bible) because she is impure.

As for the Arabs before Islam: They hated women more than death. They used to burry female infants alive or threw them into an abandoned well.
Islam: The True Liberator of women
After this long history of injustice, Allah, the Most Exalted showered His Mercy on humanity by a Religion (Islam) the teaching of which came to change the ugly human history and to create a life which humanity had never witnessed before in all its civilizations.
Women in the Quran:
The Noble Quran, Muslims' Infallible Book revealed by Almighty Allah, is replete with verses speaking about women, which indicates the honorable status Islam holds for them. There is a full Soorah (Chapter) named: "Women". This Chapter is among the longest ones in the Quran. Hereunder are some of such verses (which mean): 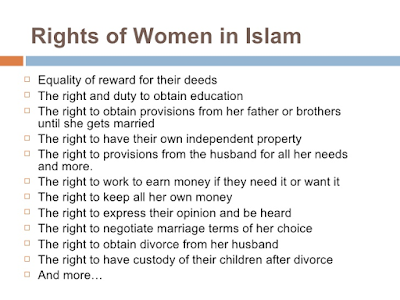 Women in the Sunnah (Prophetic Tradition)
The Prophet of Islam, Muhammad

was sent by Allah Almighty, among many other things, to elevate the status of women and maintain their honor.
He

was once asked: "Who is the most beloved person to you, O Messenger of Allah?" He

replied: "Aa'ishah".
Whenever he

was given a gift or something he

would say: "Take this to so and so because she was a friend of Khadeejah’s (his wife, may Allah be pleased with her)" [as a token of his

loyalty to her may Allah be pleased with her after death].He

said:
A woman came to the Prophet

and said: "O Prophet of Allah, pray for me and my husband." The Prophet

said: "May Allah shower His blessings upon you and your husband".[Ahmad]
Taken from : Islamweb.net
Posted by inam at 8:28 PM No comments:

Faith crisis by some Muslim youths |Some Misconceptions|~Nouman Ali Khan...

Remember Salvation comes for Free and never with a Monetary Price

Refer to the Quran the last and final revealation of Almighty on this link http://www.tafheem.net/tafheem.html 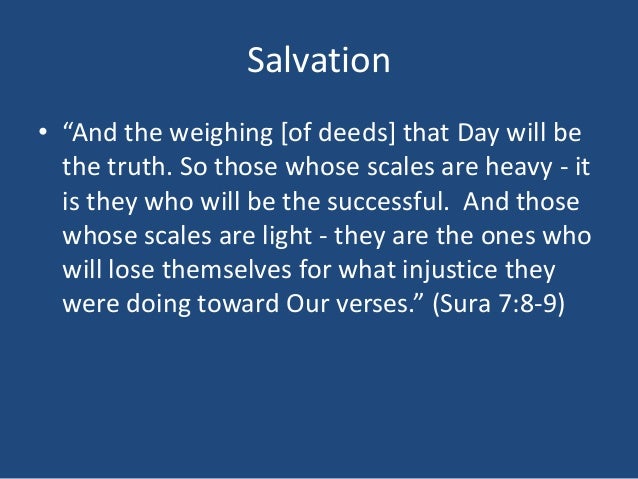 Solving the Mystery of Life

Life is a mystery which cannot be solved merely by walking in darkness. As a consumer when we buy a brand new electronic device we refer the manual to know how to use same way humans are the best of all the creations it is the most sophisticated and delicate work of the creator the Quran says

Certainly We created man in the best make. 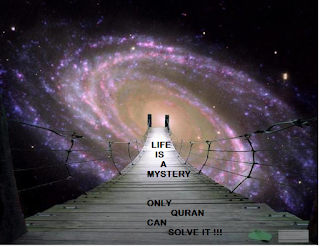 like we don't want to mess with a expensive piece we spent a fortune to buy same way we should not spoil our life with wandering in darkness and not looking for the path to salvation.

My dear readers please read Qur'an the best manual on the face of earth to teach humans how to lead a life which is filled with love , peace , tranquility and humility which is lacking in humans irrespective of race and color.

Purdah -Veil and Status of Women in Islam